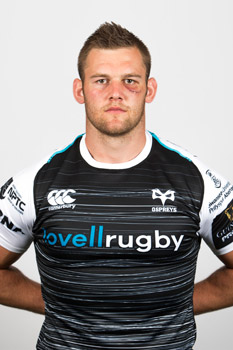 The Ospreys are delighted to announce the re-signing of Dan Lydiate on a National Dual Contract.

Lydiate is one of four National Dual Contracted players, along with Sam Warburton, Hallam Amos and Samson Lee, recommitting their future to the game in Wales.

All four Welsh Regions benefit from the re-signing, with each boasting one of the international stars apiece. With 160 Welsh caps and more than 370 Regional appearances between them, the commitment from the experienced quartet is another landmark moment in the NDC process.

British and Irish Lion, Lydiate, returned to Welsh rugby on a NDC with the Ospreys from Racing Metro in December 2014 and has gone on to make 27 appearances for the Region, scoring one try, against the Scarlets in only his second game in an Ospreys shirt. The 28-year old has played 57 times for Wales and in all three tests on the Lions tour to Australia three years ago.

“It’s great news for us, and for Welsh rugby. With Dan’s outlook on the game and his desire to keep learning, even as a senior Wales international and a Lion, he is an example to everybody.

“I believe he’s really grown as an individual and a player since he came to us less than two years ago, and there is still more growth in him, on and off the field. He wants to be the best he can be, in everything he does, and we hope to see Dan continuing to improve his all round game over the coming seasons, with the security of an NDC allowing him to prosper.

“He fits in well to our environment and is thriving as an Osprey. His selflessness and willingness to learn is what being an Osprey is all about, and he considers himself a true Osprey.”

“I’m delighted that we are able to announce that four international stars have re-emphasised their commitment to the game here in Wales by re-signing National Dual Contracts.

“Having our best players, playing here in Wales is vital to the future health of our game. We have made no secret of that and the importance both on and off the field at Regional and National level in Welsh players playing their rugby in Wales.

“The close working relationship and ambition shared with the Regions is crucial in our ability to retain players. Together we believe we are creating an environment that players want to play in and will get the best out of them on the field.

“In addition our player centered approach, is not only helping extend their playing career but also helping with success in their career after rugby.

“Seeing international players re-sign these contracts highlights the success of the programme as we continue to work hard to drive the game forward.”